Providing Your Child a “Values-Based” Education

A History of Excellence 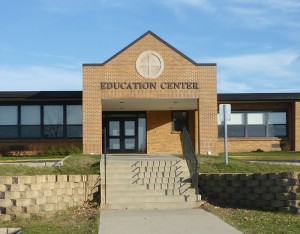 Catholicism began in the area as early as 1845; Catholic missionaries came to the settlement called Cornish’s Ferry. (Later called Osceola and, finally Algonquin).

Bishop Muldoon dedicated the first church on July 11, 1915. It was located on the banks of the Fox River and visited as a mission church of St. Peter and Paul in Cary, by Father Joseph Lonergan.

In 1955, the parish purchased a ten-acre plot with a farmhouse, which was renovated for use as a convent, and built the combination school and church building.

St. Margaret Mary School opened in September of 1955 with 130 pupils in the first four grades. Sr. Mary Joachim taught grades 1 and 2, while Sr. Mary Estelle taught grades 3 and 4. One grade was being added each year. By 1957, the enrollment for six grades was over 200. Three Dominican Sisters of Springfield, IL and one Jay teacher comprised the staff of the school.

In 1956, The Altar and Rosary Society urged all mothers of children attending St. Margaret Mary School to attend their meeting. It was their hope to form a Mother’s Club within the society. This committee was reorganized as Home and School approximately 1980.

Originally, Mass was celebrated in what is now classrooms 5 thru 8. There were no partitions and the area could seat 350 people. Grades 1 thru 4 were as they are now with a 4-5 combination. In 1958, the church moved to the lower level of the building opening the upstairs for classrooms.

By 1969 over 181 pupils were enrolled in eight grades in the parish school. At the present time, there are 231 students enrolled at St. Margaret Mary’s School. Here are a few of the changes the school has seen over the years.